After a slow start at the first half of 2019, the real estate market in Greater Vancouver seemed to be picking up in the summer. In October, home sales were 9.8% above the 10-year October sales average.

In November, home sales dropped to 4% below the 10-year November sales average as the holiday season is approaching.

If we look at supply and demand, the sales-to-active-ratio for all property types had increased enough in October to push the single family house market in Metro Vancouver from a buyer’s market at the beginning of the year to a balanced market since October 2019. For both townhomes and condominiums, the market had returned to seller’s market from a balanced market although the prices were not as high as last year. 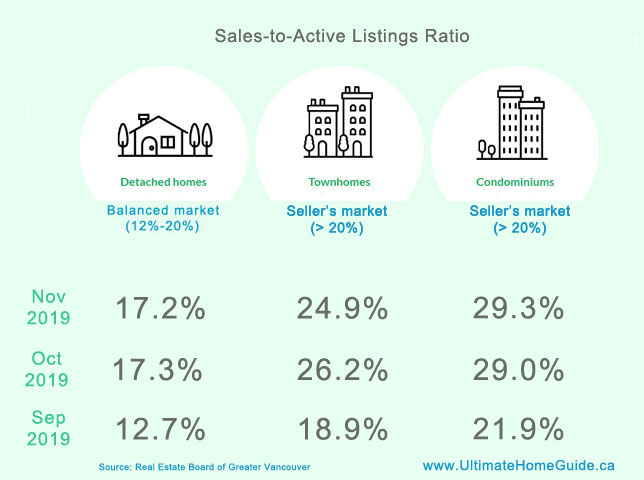 The implementation of the speculation tax, the more stringent mortgage stress test, restriction on farmland build-able square footage and continued tightening of money coming out of China were the many government and international factors that held off buyers at the sidelines at the beginning of this year. As a result, we see home prices drop about 10% across the board. The big banks started to market promotional interest rates to attract buyers.

Since summer 2019, we see buyers coming back into the real estate market.

“Home buyers have more confidence today than we saw in the first half of the year,” says Ashley Smith, REBGV president. “With prices edging down over the last year and interest rates remaining low, hopeful home buyers are becoming more active this fall.” 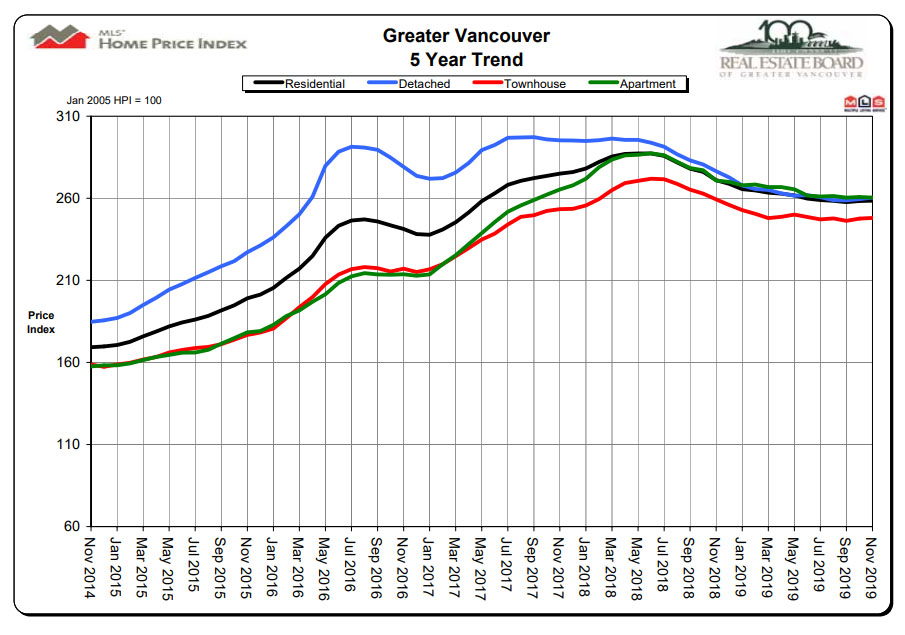 Click on the links below to see some predictions for the coming year in real estate:

This summer, real estate activity increased as compared to the first half of 2019.

“Home sales returned to more historically normal levels in July and August compared to what we saw in the first six months of the year,” said REBGV President Ashley Smith.

Buyer activity had increased, although sale is still below the 10-year aveage.

The sales-to-active listings ratio for August 2019 is 16.7%, a slight decrease from the 18% in July 2019 in Metro Vancouver. The ratio is in the balanced market range. For a breakdown of ratios for different property types, please see the table below: 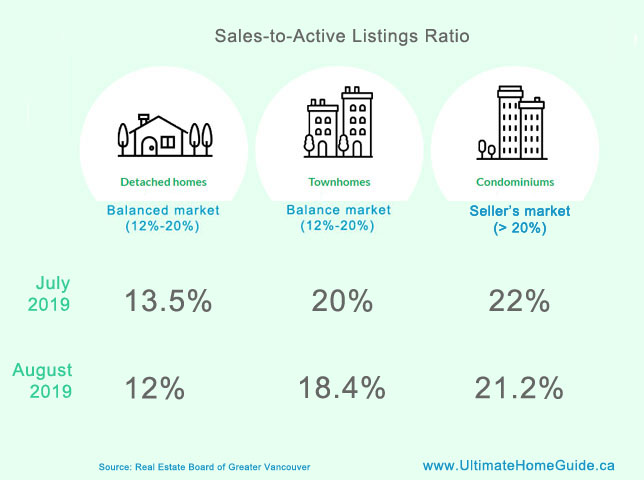 The ratio also varies in different areas in Metro Vancouver. For example, we are seeing the condos in Brentwood are sold fairly quickly if priced well.

For condos, the sales-to-active listings ratio for both July and August 2019 had surpassed the 20% market.

According to analysts, if the ratio surpasses 20% for several months, we often see an upward pressure in price.

Sales of condo increased 8.9% in August 2019 compared to the same month last year. The benchmark price of condo decreased 7.4% from same month year to $771,000. Although sales went up, inventory was also up, making sales-to-active listings ratio lower as compared to the heated seller’s market a few years ago (hence the lowering in price).

Condominium remained in higher buyer demand as compared to other property types due to its lower price point.

On September 4, 2019, Bank of Canada left the benchmark interest rate unchanged at 1.75% as trade war between China and the US was doing more damage on Global economy than forecasted in July 2019.

According to the Real Estate Board of Greater Vancouver’s stats report, housing sales last month was the lowest selling June since 2000. It was 34.7% below the 10-year June sales average.
Same with the previous two years, home sales had reached their peaks in May before leveling off in June (see graph below):

Home inventory continued to accumulate as home sales started to level off.
When we look at supply and demand with the Sales/Active Ratio graph below, we see the market had returned to the balanced market level in 2013-2014 before the boom started in 2015 when home inventory dropped to a all time low at the end of 2015.

It had been a very strong seller’s market for the past four years. Buyers didn’t have much selections to choose from and they had to act very quickly to secure any deals. Now in this balanced market, buyers can finally take the time to do the normal due diligence expected when buying a home such as doing inspections, having financing subjects, etc.

According to Kim Spencer, the manager of the Real Estate Board of Greater Vancouver’s Professional Standards Department, he had seen the real estate market slowed down like this three times in his real estate career.

Real estate market is cyclic. It always has ups and downs both in the short-term and in the long-term. The sales numbers, home inventory, sales/active ratios, the price all go up and down.

But in the long run, home prices generally go up (graph below). Even when the price dips down, it never goes back to the price at the beginning. How we wish that we can go back in time and buy single family houses at $400,000! That’s why they say, don’t wait to buy real estate. Buy real estate and wait!

We are seeing the effect of increase mortgage interest rate and government involvement on curbing the rapidly rising of home prices in Greater Vancouver.

The market is not as hot as last year but it is picking up as Spring is approaching. Year over year, the market usually does better between March and June. We still see some multiple offers in Downtown Vancouver and Burnaby’s condo market but we also see a lot of price reductions.

As we can see in the sales-to-active listings ratios for February 2019 below, the townhouse and condo markets are now in the balanced market, meaning home buyers have more choices and face less pressure to act very quickly and sellers can still expect too sell if the home is reasonably priced. As for single family homes, buyers now still have more advantages over sellers. It is a great time to buy single family houses.

If we look at the sales-to-active listings ratio for the past 10 years (graph below), we can see that the most recent seller’s market in 2017 did not reach the height it did in 2016!

People often ask us which way the market is going in all kinds of markets. Our answer is always “we don’t know in the short term”. As we can see from the graph above that ratio dropped suddenly at the 2nd half of 2016 and jumped up sharply at the beginning of 2017. It was only half an year in between that the supply and demand changed direction and then changed again.

If we look at the HPI price over the past 10 years, we see that the price has dropped to around the level in June/July 2017 which is still higher than at the peak of the market in 2016. For seller’s I think it is still a good time to sell because the price is still as good as back in summer 2017 when the ratio was at its most recent height.

People generally want to buy at the bottom and sell at the peak of any given market but as we can see above, the tide can change very quickly and selling anywhere near the peak is good enough for me.

As for buyers, when the price bottom out in January 2017, it never went below the price in May 2016 when the price was still rising steadily. I don’t think the price will ever go back to the level 10 or even 5 years go when the average home price for all property types in Metro Vancouver was about $600,000.

Even during the world financial crisis in 2008-2009, the price bottom out at $500,000 which was still higher than merely 4 years earlier in 2005 at $400,000. So for the longer run (5 years and more), real estate prices generally go up. So for buyers, it is usually better to buy earlier than later if you are buying and holding on to the property long term and the numbers make sense for your particular financial situation.

For the February stats package from the Real Estate Board, click here.