The Real Estate Board of Greater Vancouver (REBGV) released a report on Dec. 2, 2016 (click on the link below to read the full article):
Home sales and listings just below 10-year average

The sales-to-active listings ratio for November 2016 is 26.4% which is up 2% from last month. The ratio still remains in the seller’s market side.

People are asking us about the effect of the Foreign Buyer Tax. Now the media is talking about the Empty Homes Tax, claiming we are living in ghost towns…

It is interesting to see how the BC government released data that foreign buyers only make up 5.1% of all home buyers in Greater Vancouver and then within the same month passed the legislation to implement the Foreign Buyer Tax, effective within a week without grandfathering.

I am not sure how the Empty Homes Tax is going to help make real estate more affordable. It seemed to me that the government is doing all these to avoid addressing the bigger questions….

Who is restricting the supplies?

It is all about supply and demand. The government is trying to curb the demand from foreign buyers which only make up 5.1% of all buyers according to their own data.

But who is restricting housing supplies?

According to Bob Rennie of Rennie Group, in the City of Vancouver and many other district, it is getting very difficult to increase density. At city council meetings, no one wants density but everyone wants affordability. They are on the opposite end of the scale. We only have so much land and we cannot build a new home without tearing down an old one especially in Vancouver west side. You cannot provide more supply in the limited land without increasing density or without going further outside of Vancouver.

It is taking longer and getting harder to build more housing supplies. The cities are charging more and more money to get those developments approved. And guess who will end up paying for the higher bills?

Now City of Vancouver are implementing the Empty Home Tax starting January 1, 2017. The media reports half of new condos are empty. But let’s see who’s buying all the presale condos:

Cardero in Coal Harbour by Bosa, priced at $1765/sq ft, has foreign ownership at approximately 10%.

River park Place in Richmond, all 114 units sold out within a month, according to its marketing firm, only has 7.5% foreign buyers and 1/3 of these foreigner owners will receive Permanent Resident status over the next 2.5 to 3 years.

Bob Rennie predicted that with the 2018 civic election coming up, approval for new development will stop by next summer. It is the supply side that he’s worried about.

People have to live somewhere. And there’s real pressure on market, especially in Vancouver. But affordability can still be found in Surrey, Coquitlam and Burnaby, said Bob Rennie.

Sales to active ratio for November:

The townhome and condos market in all cities listed above remained in the seller’s market (ratio above 22 and colored orange) where demand is stronger than supply. The plus sign behind the number indicates an increase from last month. In most of the cities listed above, the sales ratio took a dip since March this year but started to come back up these couple months (see graph below). 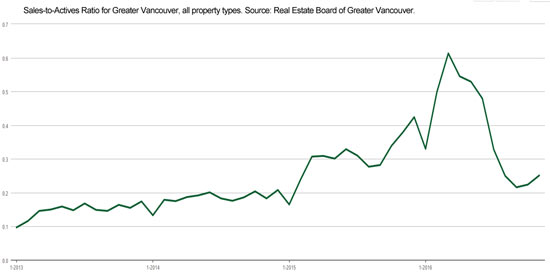 What we’ve seen in the market is that there not as much homes for sale and if a good home that is well price come onto the market, serious buyers snatch it up right away. We are still seeing multiple offers although buyers now can put in subjects and negotiate prices. We are still seeing lineup days before a presale starts selling. Let’s take Richmond for example, if you are buying a condo this month, there are a total of 399 homes for sale compared to 852 homes in the same month last year. The supply has decreased by half and no wonder the price is not coming down.